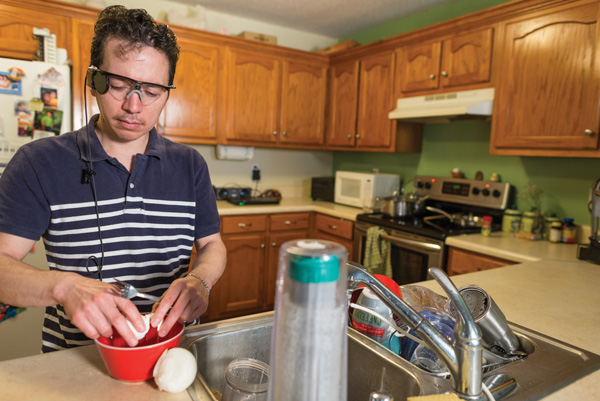 Walfre Lopez of Dalton, Ga. was the first patient at UF Health to receive an Argus II retinal implant, an artificial vision system that allows him to see shapes, and contrasts. Blind for many years, this gives him a chance at being more independent.

At UF Health, scientific research takes place every day that often leads to life-changing breakthroughs. In recent months, different teams of researchers and clinicians have used new technologies to help a Georgia man see his 12-year-old daughter for the first time and to repair a hole in an Ocala man’s skull. Here are their stories.

Walfre Lopez moves easily around his kitchen, opening cabinets to get cooking oil. Near the sink, he cuts an onion quickly and precisely. As a batch of eggs sizzles on the stove, Lopez cracks a slight smile and talks about the joy of cooking.

Nothing else about the moment is at all remarkable — except that Lopez is completely blind. More than two decades ago, doctors could do nothing for Lopez as his vision faded away due to a degenerative eye disease. Now, a revolutionary artificial-vision procedure done at University of Florida Health has given Lopez a new window to the world.

One by one, he describes rediscovering the visual details of life that most people take for granted: Seeing a pan on the stove and the dishes in a sink. Spotting the outline of a full moon. Perceiving the headlights of passing cars on a busy Atlanta highway. Lopez says he is grateful for how the artificial vision system has improved his day-to-day life. It also delivered a singularly spectacular moment for Lopez and his daughter.

Early this year, Lopez got what he calls a “bionic eye” — a microelectrode array implanted in the retina. The electrode takes over the function of damaged retinal cells, sending signals to a special pair of glasses that allows Lopez to see shapes and contrasting images. Lopez is the first patient to receive the Argus II Retinal Prosthesis System at UF Health, one of 18 implant sites in the United States. Gibran Khurshid, M.D., a clinical faculty member in the UF College of Medicine’s department of ophthalmology, is the first retina surgeon at UF Health to have expertise in this area.

Lopez, 46, of Dalton, Georgia, was in his early 20s when he lost his sight to retinitis pigmentosa, a genetic disorder that destroys light-sensitive cells in the back of the eye. It affects about one in 4,000 people in the United States and worldwide, according to the National Institutes of Health’s National Eye Institute.

At the time, his son Bryan was just 2 years old. Twelve years ago, his daughter Brianna was born. Lopez had never seen her.

As an artificial-vision system, the Argus II is not an exact replacement for natural sight — users can recognize shapes and perceive the contrast between light and dark objects. Still, its effects are life-changing in big and small ways. For Lopez, it has made his home more accessible.

“When I’m walking around the living room, I know exactly where the windows and doors are located. I couldn’t do that before,” he said.

The retinal implant has also allowed Lopez to rekindle his interest in cooking. In the kitchen, the Argus II system helps Lopez find cooking items. At the sink, white cups and dishes are easily recognizable.

“I like to cook, and now when I’m in front of the stove I can see the pan. That just wasn’t possible before,” Lopez said.

The device has been a blessing for the whole family.

Marioly Lopez will never forget the days when her husband’s sight was fading and he was battling sadness, anger and a host of other emotions. The first two years of his blindness were especially difficult, but the retinal implant has delivered more than just a sense of vision.

“I thought he was going to be blind for the rest of his life. We had a lot of hard years, and now he has a way to see the world again,” she said. “It has brought back some of our old life.”

The Argus II system takes advantage of a patient’s remaining cells to create some stimulation within the retina, said Khurshid. He implanted a tiny microelectrode array in Lopez’s right eye during a highly complex surgery in mid-January. The electrode array takes over the function of diseased cells in the eye and transmits signals to a camera in the patient’s glasses. The result: Once-blind people have a 20-degree field of vision.

“It’s not full vision as we know it. It’s almost like having a sixth sense, and then you have to train the patient how to use it,” Khurshid said.

Activating Lopez’s retinal implant system during the February appointment in Gainesville and seeing his family smiling was a moment of utmost satisfaction, joy and accomplishment, Khurshid said. A day before the activation, Khurshid wanted a sense of what Lopez had endured, so the physician put on a blindfold. Five minutes of darkness was all he could tolerate.

“He has been living in a dark, black cave for almost all of his life,” Khurshid said of his patient. “Now, he’s able to see and navigate around. It’s a 180-degree turn in his life.”

Ana Leffel, vision rehabilitation manager for Second Sight Medical Products, said patients have to spend time getting accustomed to the device. For Lopez, that meant using the device for 30 minutes and taking a two-hour break. Patients can eventually use the device for four to six hours a day, he said.

UF Health is one of 18 sites nationwide authorized by the federal government to provide retinal stimulation treatments to patients with severe retinitis pigmentosa who have little or no light perception in both eyes.

For the Lopezes, the device has already brought considerable joy. His family’s love and support never wavered, and Lopez never gave up hope that something spectacular might happen one day.

“I knew that my wife was there for more than 20 years, but I couldn’t see her until now,” he said.

In late February, Lopez and his family returned home after his “bionic eye” had been activated at UF Health. Brianna asked her father to give it a try.

“I put the glasses on and I saw her standing in front of me,” he said. “I got very excited. I saw her shape and the outline of her face. It was so special to see her for the first time.”

Recalling the moment, Brianna’s face lights up and her voice rises.

“The first thing I noticed is that he could see the shape of my face,” she said, “and it made him smile.”