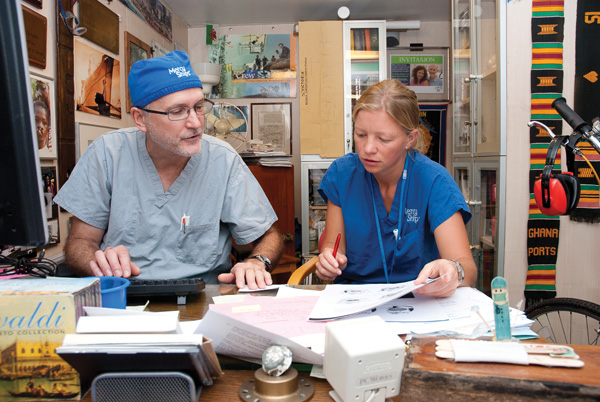 Abigail Boys makes her morning rounds, familiarizing herself with the patients before heading into surgery, operating very carefully on the various types of patients.

There’s a boy from Sierra Leone named Timothy* with eyes full of light and one of the brightest smiles around. It’s heartbreaking to know he used to skip school because other children would throw stones at him — all because he was born with a cleft lip.

The torment was unbearable. Timothy had extremely low self-esteem, and the condition left him highly susceptible to infection and disease.

Several years ago, Timothy underwent surgery to correct the birth defect, and the difference is like night and day. Before, he looked toward the ground and avoided eye contact. Now, he exudes joy, smiles often and walks around with his head held high.

His success story is one of dozens Abigail Estelle, M.D., D.D.S., is connected to through her international outreach as a surgeon, humanitarian and children’s health advocate.

Estelle, an oral and maxillofacial surgery resident at the University of Florida College of Medicine – Jacksonville, is the founder of a charity that gives resources, support and medical attention to children in developing countries. These children typically live in extreme poverty or in remote areas and struggle to access health care.

“It’s the reason for my training,” Estelle said. “I feel it’s my duty to help other people in need.”

Originally from the United Kingdom, Estelle traces her love for medicine and service back to her childhood. Her mother was a nurse, so Estelle spent a lot of time around the clinical setting. During medical school, Estelle took a year off to volunteer with Mercy Ships, an organization that provides charity and medical aid to developing countries via a traveling hospital ship. She worked as an instrument sterilizer and observed an array of operations in the process.

She spent four months in Sierra Leone and then four months in Togo — two countries along Africa’s western coast. While providing care, Estelle and other colleagues picked up sheep and goats from nearby Gambia and delivered them to families in Sierra Leone, which was left in famine and despair after a civil war.

“A lot of rebuilding and healing was needed,” Estelle said. “Medicine was one part of that, but these other things were important as well. That really got me interested in issues impacting developing nations and making a difference.”

Estelle devised the plan for her charity after a 2008 mission trip to Cameroon. There, she met an infant who was born with its heart outside of the chest. The mother did not receive prenatal care during her pregnancy, making this severe birth defect a complete surprise.

“The baby’s heart was sitting on the outside of the chest, beating away,” Estelle said. “The infant did not develop a sternum. It’s a midline defect, like cleft or spina bifida. The heart never descended into the chest.”

Estelle took an intense personal interest in the infant’s health. The mission hospital in Cameroon wasn’t equipped to operate. She used personal contacts to raise money and ultimately arranged for the patient to travel to a hospital in Milan, Italy, where physicians performed the lifesaving surgery at no cost. She was with the infant and the mother each step of the way. Reflecting on that experience, Estelle realized she wanted to facilitate organized charity work.

“Dr. Estelle is a special resident and a spectacular individual who has devoted a large part of her life to helping those who are less fortunate,” said Tirbod Fattahi, M.D., D.D.S., an associate professor and chair of oral and maxillofacial surgery and director of the department’s residency program. “We are proud of her and happy to have her here.”

Earlier this year, Estelle received the Points of Light Award, an accolade given by the U.K. prime minister recognizing citizen volunteerism.

“Your tireless work is transforming lives across Africa by helping children access specialist surgeries that would otherwise be unavailable to them,” Prime Minister Theresa May said in a personal letter to Estelle, who earned her medical degree at King’s College London School of Medicine. She is on track to complete her residency in 2019.

“I grew up with a faith that says anything is possible, love conquers all and every person is valuable,” Estelle said. “All those things set me up to be in a position where I’m able to help this charity succeed.”