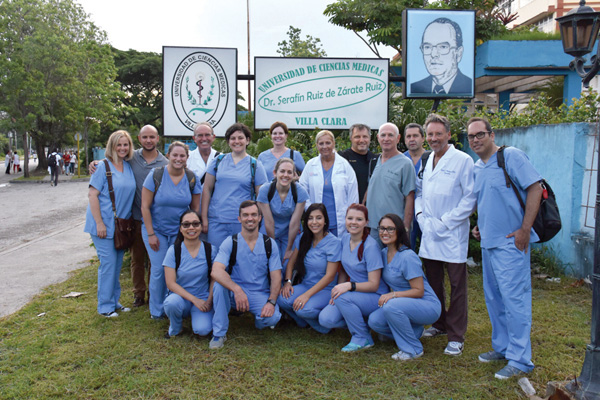 Six years ago, Yandy Gonzalez-Marrero left his home in Cuba for America, but Cuba never left his heart.

He had studied at the Medical University of Villa Clara, but he did not graduate. Instead, he decided to restart his education in the United States to provide a better future for himself and his family.

After graduating from the University of South Florida, he was accepted at seven dental schools, and he chose UF. Gonzalez-Marrero, 31, now a third-year dental student, said studying in both countries showed him just how much the medical field in Cuba lags behind the U.S. He wanted to find a way to bridge that gap.

Last year, he and fellow third-year student Olga Saniukovich, 21, from Trinity, Florida, began working on a way to make that dream a reality. They began planning a trip to Cuba to provide dental services to underserved people and help form a bond between the two dental schools.

Gonzalez-Marrero said Dean A. Isabel Garcia, D.D.S., M.P.H., was a tremendous help as the organizers met with other UF officials to gain approval for the trip.

“There are certain ideas of what Cuba is about and what to expect,” Gonzalez-Marrero said. “But this is not a political trip, it is an educational effort to link two schools.”

As this was a student-led trip, those who went paid their own way. There were no problems with U.S. government restrictions, as it was an educational service trip.

Each day started at 6:30 a.m. The UF group ate breakfast and then traveled by horse-drawn carriages to the University of Medical Sciences of Villa Clara. They huddled alongside their Cuban counterparts to discuss the day’s patients.

Third- or fourth-year dental students from Villa Clara worked with UF students, while UF faculty members oversaw the interactions.
data-gallery
Saniukovich said she brought home from Cuba a new sense of confidence and some heartwarming memories.

This trip was the first of what the two friends hope will be an annual expedition.