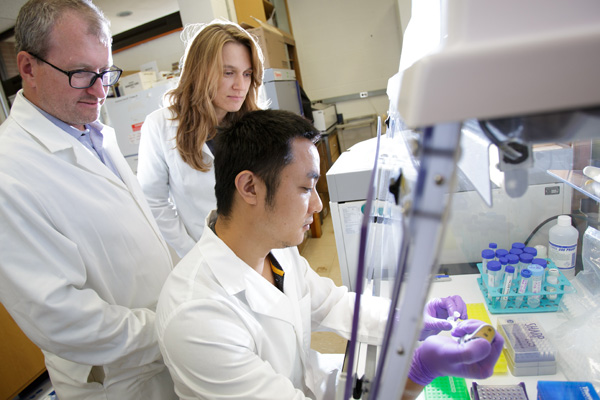 Dr. Jasenka Zubcevic and her team are studying the relationship between brain function and the gut

Scientists at the UF College of Veterinary Medicine have linked brain communication to immune system response in the gut, a finding that could have implications for the treatment of many immune and neurologic diseases as well as for diseases of the gastrointestinal tract. Gut

The gastrointestinal tract helps regulate the host immune system throughout a lifetime and a large number of diseases involve dysfunction of the GI tract as well as the immune system, said Jasenka Zubcevic, Ph.D., an assistant professor of physiological sciences at the UF College of Veterinary Medicine, the study’s senior author. However, there are many autoimmune diseases where the gut has not been recognized as a contributing factor.

“The gut is a forgotten immune organ. It’s so vast and really does affect a lot of our immune system development from a very early age,” Zubcevic said.

To investigate the brain’s effects on the gastrointestinal tract, Zubcevic and her colleague, Chris Martyniuk, Ph.D., an associate professor of physiological sciences at UF, used a novel mouse model to show that simply by manipulating one variable — communication with bone marrow cells — they were able to see a change in the make-up of gut bacteria.

By suppressing the brain’s neural inputs into the bone marrow, the scientists found a corresponding suppression of inflammation and a shift to beneficial bacteria in the gut.

“The immunosuppression was associated with beneficial effects on the microbiota, or the microorganisms, found within the GI tract of the mice used in our study,” said Martyniuk, who also is affiliated with UF’s Center for Environmental and Human Toxicology.

“We had more of what could be considered a beneficial bacterial environment and less of those type of bacteria considered particularly pathogenic,” he added. The findings were published in Frontiers in Physiology.

The researchers said they were intrigued at the thought of studying the relationship between the brain, the gastrointestinal tract and immune system diseases and adapted an existing mouse model for this purpose.

Although emerging evidence has recently shown the association between microbial imbalances in the gut and neurogenic diseases and conditions such as hypertension, sleep apnea and anxiety, the complex interplay between the brain and gut microbiota makes it difficult to determine cause-effect relationships in disease, which subsequently hinders efficient treatment, according to the study.