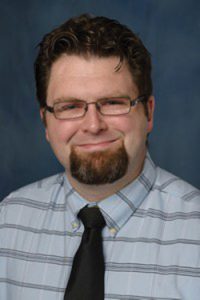 When Brandon Seay walked into the wrong classroom his sophomore year of high school in Atlanta, he didn’t realize at the time he was opening the door to a new chapter of his life.

The choir teacher asked him where he was going, and Seay replied he was looking for the drama classroom. Something about Seay led the teacher to ask him to sing a few notes. He did, and the choir teacher informed him he would be staying in that class.

Seay, now 34 and a third-year pulmonology fellow in the UF College of Medicine’s pediatrics department, has managed to combine his passion for music and medicine in ways that benefit his patients and himself.

He recalled a patient who struggled with vocal cord dysfunction, in which the vocal cords are unable to open correctly.

“Some of the exercises you do to help with that are based off of breathing exercises I used to do as a tenor,” he said. “I tried to walk the patient through these exercises that I did every day during my music training.”

Seay’s musical aptitude put him on the path to a medical career by helping him first get into college. His high school choir teacher set up music auditions at all of the colleges to which he applied.

“I had always been interested in medicine,’’ he said, “but I needed something that could get me a scholarship to college as well.’’

Seay was awarded voice and tuba scholarships to Berry College in Rome, Georgia. There, he played in ensembles and sang in the advanced choir while taking medical school prerequisites in the summer.

“I was able to work with a lot of kids while on the island as well,” he said. “Every Saturday morning, the only break you got (from medical school), I would go to the beach and play with the kids.”

Seay said a bus driver would bring orphans to the beach to play, exercise and learn about oral hygiene and nutrition from the medical students. He and other students would make the children lunch before they were brought back to the orphanage.

Seay has known since he was very young that he wanted to work with children. His mother was a pediatric nurse on a pulmonary floor of a hospital, which caught his interest. When he worked in the hospital while completing his degree, he also worked with patients who had asthma or cystic fibrosis.

Seay said his musical background and training gave him a different viewpoint from other medical students. “You always want to have somebody who has an outside perspective,” he said. “You don’t want everyone to be thinking the same way as you.”

With a liberal arts education, Seay said he has a different approach to problem-solving. When he practiced his musical pieces, he would rehearse more than 100 times before performing just once. This strenuous rehearsal regimen served as practice for medical school because he would study for countless hours for one exam.

“You have to have that dedication to keep practicing, keep repeating, keep making mistakes,” he said.

Seay has applied for an additional year of fellowship in sleep medicine at UF. After that, he would like to return to Atlanta to work at a pediatric pulmonary practice. His mother, father, brother and extended family also live there.

His wife, Mary-Ann Fares, M.D., a vascular neurology fellow in the UF College of Medicine, is originally from the United Kingdom. She doesn’t have a permanent place to call home in the U.S. yet, so Seay is hoping that place will be Atlanta. There is a large population of patients with asthma, cystic fibrosis and sickle cell disease in that city, Seay said, and he is looking forward to working with them.