A Greater Swiss Mountain Dog named Chance, rescued in Canada after being abandoned with a severe limb deformity, is walking better today, thanks to veterinarians at the University of Florida College of Veterinary Medicine who used advanced 3D technology to operate on him earlier this year.

A pot-bellied pig named Bebop, who also received limb-corrective surgery at UF with 3D printing help, is back to rooting in his yard in Port St. Lucie, Florida, which he’d stopped doing after a painful shoulder injury.

Chance and Bebop are the first two clinical cases treated at UF through the use of a state-of-the-art 3D printer that uses high-performance plastics and offers numerous advances in patient care, teaching and research, UF veterinarians say.

“We have the Rolls-Royce of 3D printers,” said Adam Biedrzycki, B.V.Sc., Ph.D., an assistant professor of large animal surgery at UF, who purchased the printer with start-up funds when he was hired by the UF College of Veterinary Medicine three years ago. “It can not only print parts that are approved in the aerospace industry to go into aircraft but also parts that are biocompatible for medical applications. That is, they can be used in live tissues.”

This is important, he said, because he and UF small animal surgeons, including Stanley Kim, B.V.Sc., an associate professor of small animal surgery who sought out a collaboration with the Biedrzycki lab and subsequently operated on Chance, wanted bone models that “actually feel and handle like the real thing” during presurgery practice.

“If you use cheap plastic, when you drill it or cut it, it tends to melt, so it does not perform like the real thing,” Biedrzycki said. “So, for practicing surgeries or for teaching, it is not the best thing.”

Although 3D technology is being used in surgeries at a handful of veterinary teaching hospitals in the United States, UF’s printing capabilities are unique for several reasons. The printer and the materials it uses are high-quality, the college location allows for a quick turnaround time, and the software allows surgeries to be planned out on a computer ahead of time.

“We can first make the cuts and simulate the repair and unite the bones virtually with plates and screws in the 3D computer environment, then print them out and complete the surgery using the printed models,” Biedrzycki said. “This means time spent on the front end leads to time saved in the operating room, greater patient safety due to reduced risk and enhancement of surgical accuracy.”

The process begins with the inputting of diagnostic CT scans into specialized software the veterinarians use to plan a specific surgical procedure. Then, a model of the patient’s bone is printed, to which a customized 3D printed surgical guide is attached.

“We affix the guide with a couple of pins, and like Cinderella’s slipper, it fits absolutely perfectly and only fits that bone,” Kim said. “It’s matched to the contour of the bone, then we know just where to cut.”

He said the printer’s primary usefulness clinically is the ability to create these customized printed guides.

Biedrzycki has only used the technology clinically on Bebop, the pot-bellied pig, who had a chronic shoulder luxation that required a complicated surgery to correct.

“We didn’t use the guide in Bebop’s case, but we eyeballed where we’d make the cut on the bones, then contoured bone plates to fit the model so we’d know where to puthe plates in surgery. The procedure went much more rapidly because we did a lot of the hard work beforehand.”

Biedrzycki is investigating the technology’s potential for surgery on horse hooves. He also is excited about the potential use of 3D printing in teaching and research.

“We are doing and trying things with the 3D printer in the veterinary medical field that people haven’t done before, particularly if you look at the implantable high-performance plastics,” Biedrzycki said. “What is key for us is that the printer is in a surgeon-friendly lab rather than locked away in some engineering department on campus printing one-off examples. The guides and work we are doing are changing the way we approach cases. We hope that the knowledge and expertise we have will allow this to become routine, benefiting many more patients.”

Kristin Campbell of Port St. Lucie, Bebop’s owner, said the 2-year-old pig is doing well and that his recovery exceeded their expectations.

As for Chance, life has taken a huge turn for the better thanks to the Greater Swiss Mountain Dog Rescue Foundation, which facilitated his transport to UF — and the procedure Kim conducted to help him.

“Chance was found tied to a pole with a note asking that someone please find a new home for him,” said Pat Saxon, who is president and chair of the Greater Swiss Mountain Dog rescue group based in Bradenton. “He was then taken to a shelter in Canada and we were contacted to see if we could help.”

A veterinarian in Canada diagnosed the dog with a bilateral patellar luxation due to limb deformities, with the right hind leg being the most severely affected. Aware of the 3D technology, the veterinarian believed it could help Chance, although he felt the prognosis was guarded at best, Saxon said.

“We are so happy to see him be able to walk, run and play more normally,” she said.

Physical therapy could lower need for opioids, but lack of 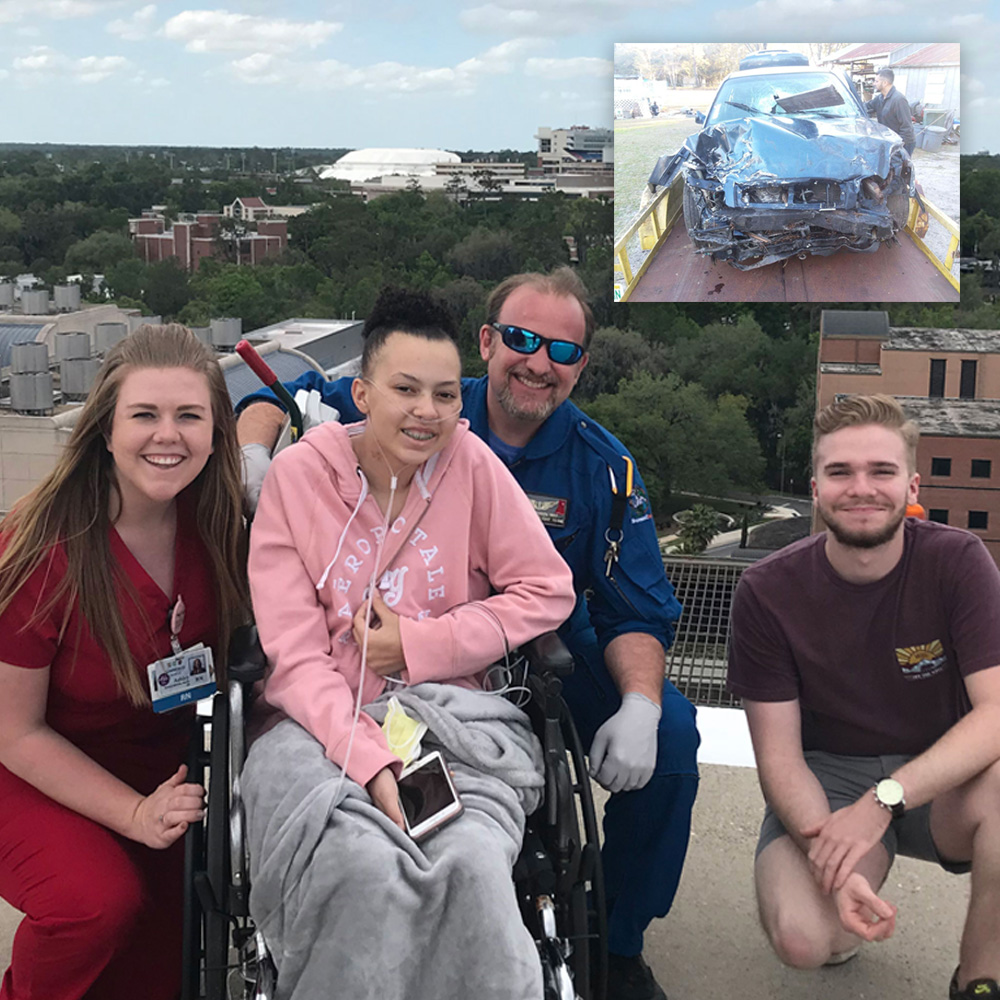