The cruelty of bullies kept Katherin Cordero from public places. Other kids in Guatemala shunned her. Some said she was cursed or called her a witch, as if her misshapen jaw were a supernatural omen rather than a rare birth defect that made an innocent life a daily struggle.

Doctors would say it was remarkable the girl survived to become a teenager. With her jaw fused, Katherin could not open her mouth.

Several of her lower teeth had been extracted simply to allow her to push scraps of food through the opening. She was malnourished, vulnerable to choking, her life dominated by pain.

She talked with difficulty through gritted teeth.

As she would later say through an interpreter, “My voice wouldn’t come out too much.”

What might have all-too-predictably led to tragedy instead ended in an unimagined new life for a teen from an impoverished background with the help of University of Florida Health surgeons and a multidisciplinary team of physicians, dentists, nurses and staff.

Katherin came to Florida in November 2017 and returned to Guatemala the following August with a surgically repaired jaw that allowed her to open her mouth for the first time — to eat, to smile, to live free of the stigma that isolated her.

She left Florida as a normal 15-year-old girl.

“This has been super rewarding,” said Jessica Ching, M.D., the UF Health physician who performed two surgeries on Katherin’s jaw. “The hope is that this is a transformative experience for Katherin. It has allowed her to speak properly, to obtain proper nourishment and to no longer be in pain. The hope is that she can go back and live an independent and productive life in her home country without the discrimination she had experienced.”

More than a jaw was unlocked by UF Health surgeons. So was one girl’s future.

The youngest of five children, and the only girl, Katherin lived in San Pedro Pinula, a town of about 3,200 residents in a mountainous region east of Guatemala City, where her family worked in agriculture. Her mother had been injured and paralyzed in an accident when she was younger, leaving Katherin as her caregiver.

Katherin’s life is a study in perseverance.

She ate only a liquid diet most of her life, working the nutrition around her teeth. She struggled to keep weight on and became badly malnourished. Then, at age 11 or 12, a Guatemalan dentist extracted several of her lower teeth so she could pass pieces of solid food into her mouth. They had to be small as she could not chew.

Katherin’s teeth became badly decayed because she could not access them to brush. Infected gums also were a source of continual pain.

The gravest danger was her vulnerable airway. She could easily choke on a piece of unchewed or regurgitated food. Even coughing was a hazard.

“She really defied the odds,” said Ching, an assistant professor in the UF College of Medicine’s division of plastic and reconstructive surgery in the department of surgery.

Katherin’s jaw joint was fused on the right side, up near her ear. Ching thinks this occurred during the girl’s embryonic development. As Katherin grew, the lower jaw, which was locked in place, could not grow normally and remained too small. As a result, the lower jaw was severely recessed, ruining the symmetry of her face.

Asked how this affected her life, Katherin offered a one word answer: “Mucho.” A lot.

Perhaps 1 in 100,000 children are born with the defect, Ching said. In the United States, a baby would start receiving treatment not long after birth.

“A child here in the U.S. would never have been allowed to leave the hospital without treatment because of fear that they would suffocate,” said Ching. 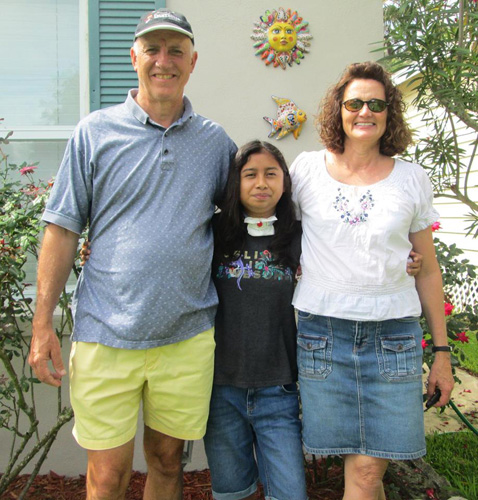 Katherin came to UF Health via Childspring International, an Atlanta nonprofit that arranges medical care for children from the developing world with a major need. The group, working with an aid organization in Guatemala, connected Katherin to UF Health.

Traveling to Florida without her family, the teen stayed with a host family in St. Augustine.

The girl who arrived at Betsy and David Dumfords’ home in November 2017 was painfully shy. In public, she held her head down, not making eye contact with anyone.

The retired couple, who often take in Childspring children from around the globe, immediately worried about her choking.

They brought her to a pediatrician. “He opened her mouth to try to glance in it, and she just teared up,” Betsy Dumford said. “It was severe pain.”

In the Dumfords’ home, Katherin found something that was missing in Guatemala — a young friend who would not judge her. His name was Cris, an 11-year-old Guatemalan boy who by happenstance was temporarily living with the Dumfords. He was receiving care at a Cincinnati hospital.

Cris had a disfiguring facial cleft, a malformation leaving a gap in bone and soft tissue. This was Cris’ fifth stay with the Dumfords as he went back and forth for surgeries. He was bilingual, and served as a translator for the family, who spoke little Spanish.

They played soccer and basketball and badminton, accidentally batting an army of shuttlecocks over the Dumfords’ backyard fence.

“I think it helped her prepare for her own surgery seeing what he was going through,” said Betsy Dumford. “He was really a calming force for her.”

The Dumfords marveled at how Katherin seemed to thrive despite her disability. “She was one tough cookie,” Betsy Dumford said. 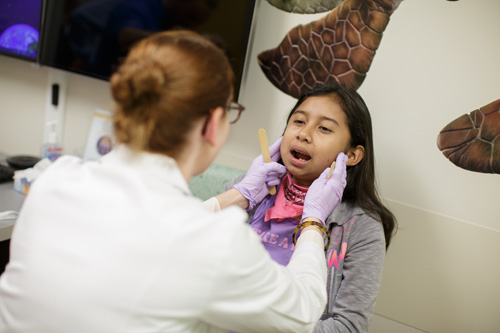 During the first in January, Ching tackled the recessed lower jaw, which was an impediment to breathing, eating and speaking.

Ching cut the bone on either side of the lower jaw on the sides of the face, and then installed tiny metal distractor devices that bridged the cut and were anchored on each side to jawbone.

The distractors have “antennas” projecting out from the skin that, when turned with a screwdriver twice a day, move the two sections of cut jawbone apart a tiny bit at a time. The bone continuously heals during the process, until the lower and upper jaws match.

“The body keeps thinking it’s got a fracture,” Ching said. “So it heals with new bone.”

After completing the process, the balance of Katherin’s face was normal.

In the meantime, William O. Collins, M.D., an associate professor in the UF College of Medicine’s department of otolaryngology, created a tracheostomy to ensure Katherin had a protected airway. She would keep it through much of her treatment.

Ching removed the distractors. Then she addressed the part of the jawbone that was fused to Katherin’s skull. She cut out the fused section of jawbone. Then, using a rib graft, Ching constructed a new joint for the jaw.

Other repairs also were necessary. The fused section on the right side of the jaw caused the left side to become malformed. So Ching eliminated the resulting overgrowth of bone to allow the jaw to move properly.

The jaw was wired in place as Katherin awoke from surgery.

A few days later, the wires were removed.

Ching said in Spanish, “Katherin, open your mouth.” “I can’t,” she answered.

“You’re doing it right now talking to me,” Ching said.

Katherin moved her hands up to her mouth in a quick motion. Then she started to cry. It was the first time she had ever opened her mouth.

In July, Christopher Connell, D.M.D., an assistant professor in the UF College of Dentistry and a pediatric dentist, treated Katherin’s dental problems. She
underwent a complete oral rehabilitation, including extractions, bridges and a cleaning.

In a follow-up exam, she now had a ready smile. She was giggly. Katherin no longer used her hand to shield her mouth as had been her habit.

“She had to be so strong for so long, you almost forgot that she was just a teenager,” Connell said. “This is why I got into pediatrics in the first place — for
patients like this.”

Over the coming weeks, the Dumfords saw a shy girl pull out of her shell. The couple noticed her looking in the mirror more often. She now walked in public with
confidence. “She just blossomed,” said David Dumford. “It was amazing to see the change in her.”

The family took Katherin to a Mexican restaurant one day. A handsome young man was their waiter. Katherin had always professed she would never marry.

“And Katherin was just kind of whipping her hair around and batting her eyes,” David Dumford said.

He told her, “For somebody who doesn’t want to get married, you sure are looking at him a lot.”

Confident enough, it seems, to flirt. 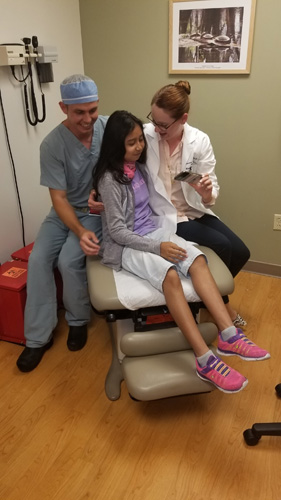 A case as complex as Katherin’s, said Ching, takes an army to treat.

After the Dumfords left on a long-planned vacation, Katherin stayed with a second host family in St. Augustine, Tracey and Timothy Ramsey.

“We had a huge amount of institutional support and collaboration between departments that made this possible,” said Ching, who was overwhelmed by the girl’s strength.

“She has a lot of fortitude,” Ching said. “I can imagine that’s been, for better or worse, built into her because of what she experienced growing up and the kind of isolation that she’s also had to experience.

“I think she definitely has the maturity to understand the opportunity that she’s been given now to go back and lead a normal life, whereas before that was an impossibility. I think she is definitely someone who will make the most of it.”

Before leaving, Katherin gave a note to Ching. “Thank you for changing my life,” Katherin wrote. “I gone thru a lot of pain all this year’s.

Thank you Dr. Ching for the surgery’s. I am happy. And my family too. Thank you so much. Love Katherin.”

In an interview after the surgeries, Katherin said she looked forward to getting home to a family that “miss me a lot.” She said her life will be a happy one when she gets back. She wants to work in law enforcement one day. And she wants to play baseball.

She thanked all the medical staffers who helped her. “My family’s very happy,” Katherin said.

She then flew back to Guatemala, where her family met her at the airport with hugs, balloons and a simple sign.