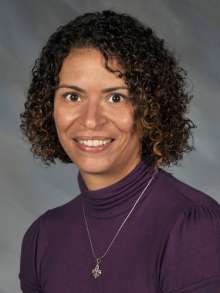 It was a day that shook the country to its core. Millions of Americans were glued to their televisions in horror as footage of hijacked airplanes crashing into the World Trade Center was repeated over and over. The tragic event motivated a medical student at the University of Cincinnati to sign up for the U.S. Navy.

“I was already a physician when I enlisted,” said Lisa Jones, M.D., chief of pulmonary, critical care and sleep medicine at UF Health Jacksonville. “I was stationed in Puerto Rico for three years and then completed my pulmonary and critical care fellowship with the Navy in San Diego. I was only the third female to complete the program.”

Jones was later stationed at Naval Air Station Jacksonville in 2010 when she got the news that she was being deployed to northern Afghanistan. For 10 months, she provided critical care on a surgical team that supported a U.S. Army Delta Force group.

“Special Forces mostly operated at night, so during the day we ran a female humanitarian clinic that was supported by German forces,” Jones said. “Women in
Afghanistan had to have a male escort if their medical provider was a male. My team was all-female, which allowed women to really open up about their medical
needs. We provided screenings, gynecological and contraceptive care. That was something that brought me light when I was in a dark place.”

During her deployment, Jones directly cared for severely injured troops and conducted more than 90 emergency resuscitations. She administered more than 100 hours of intensive care and managed the logistics of critically ill patients. While in Afghanistan, Jones also met her husband, a German special operations forces combat medic who also served as one of her surgical team’s translators.

Shortly after her return, Jones joined UF Health Jacksonville, where she applies the skills she gained in the military as the medical director of the intensive care unit.

“There is not a lot of difference between Afghanistan and what we see here,” Jones said. “Military medicine and academic medicine are very similar. In the military, there are just fewer numbers because it is typically made up of younger and healthier people.”

“The hospital at NAS only has a six-person ICU and they don’t have the acuity that we have here,” Jones said. “After serving in Afghanistan, I realized they need to come here and see the battlefield that we have.”

As a result of this collaboration, Jones was awarded the 2018 Admiral Paul Kaufman Award in August. The annual honor is given to a local physician or health care professional for delivering outstanding community service to Naval Hospital Jacksonville beneficiaries and staff.

“I was able to take care of members of the military who may not be able to afford my services in the private sector,” Jones said. “I am doing the same here at UF Health Jacksonville, so it was an easy transition. Many of our patients haven’t had the opportunity to sit in front of a doctor who will make eye contact with them, who will not interrupt them, who will listen to them and try to get them what they need. They are heard and respected and that’s what brings me pride here.”

Jones is one of about 500 people employed by UF Health, who are enlisted military or veterans.