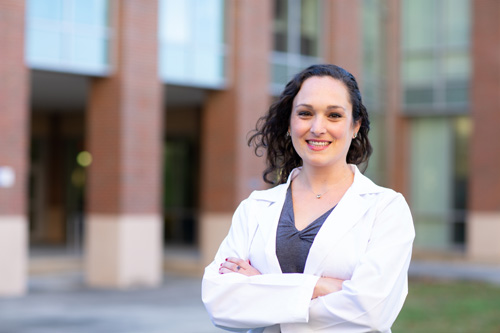 From the lab to the senate

UF graduate educates senators, others on infectious diseases as an intern in Washington, D.C.

When one embarks on a journey of scientific research, there’s no telling what twists and turns the path may take. For Heather Drew, whose interest in infectious diseases was sparked as a child by the novel “War of the Worlds,’’ the road last year led from Gainesville to the Washington, D.C. office of then-Sen. Bill Nelson.

Drew, a graduate fellow in immunology and microbiology in the University of Florida College of Medicine, spent five weeks as an intern in Nelson’s office
sharing her expertise on antibiotic resistance with senators and staffers. She said she learned firsthand the critical role researchers and scientists can play in helping to craft national policy, a career interest of hers for many years.

“This internship was an opportunity for me to marry my research with the developing field of science policy,” Drew said. “I’ve seen a lot of gaps among policy, science and the public. This is going to be a growing problem that students and future researchers must change.”

Drew was taking part in a National Institutes of Healthsponsored training program in basic microbiology and infectious disease headed by David Bloom, Ph.D., a professor in the UF College of Medicine’s department of molecular genetics and microbiology. She traded the lab bench for a seat at the Senate Committee on Commerce,

Science and Transportation, where she sat in on meetings with constituents from across the nation.

“We essentially served as a sounding board and tried to integrate their feelings and concerns to develop legislation reflective of their needs,” she said.

Drew’s duties also included drafting several congressional memos for Nelson, including one about the impact of climate change on human health. Nelson, a Democrat, lost his re-election bid in November to Florida Gov. Rick Scott.

“I wanted to highlight the fact that if we don’t take preventive measures to increase the resiliency of our environment, it’s going to impact human health,’’ she said.

Drew was pleased to note that politicians on both sides of the aisle appeared supportive of her work.

“I think people like to polarize environmental issues as not being a concern of both parties, but human health should be a nonpartisan issue,” she said.

“Taking varying approaches to maintain human health is going to be When Drew was offered the opportunity to present her work on antibiotic resistance, she advocated for the One Health Initiative, a movement to forge collaborations among all scientific, health and environmental disciplines
backed by the Centers for Disease Control and Prevention, the U.S. Department of Agriculture and the American Veterinary Medical Association, among other national organizations.

“You cannot separate human, animal and environmental health. They all intersect,” she said. “Every bit of legislation is going to impact human health.”

As evidence, Drew explained the impact of the large amount of antibiotics given to livestock across the country, drugs that trickle down into the environment through the soil and water supply.

“Those antibiotics filter into the environment, which could lead to resistant bacteria. I tried to paint them a broad picture. This is a problem pervasive throughout many areas of our country,” she said.

“Every year, we’re seeing more resistance in bacteria and more infection,’’ she added. “This is something we need to address now, especially with our aging population, or we’re going to start seeing diseases that are resistant to every treatment we have.”

Drew has long considered beginning a career in science policy after she graduates this year, and her internship showed her she is on the right track toward achieving that goal.

“When I came back to Gainesville, I felt I had really left an impact and educated individuals who are integral to designing policies in the U.S.,’’ she said.

“For a UF graduate student to sit down with these policymakers, bring the concerns I hear every day and translate that for people who don’t have a science background, that was very powerful. I translated scientific concepts into something that made them think, ‘Wow, this is something to address.’”

Growing up with two environmental engineers for parents, Drew has always been fascinated by observing and measuring the world around her. She was inspired as a child by “War of the Worlds,” in which aliens invade the earth but are defeated by an infectious disease, and remains motivated to measure the ever-changing relationship among bacteria, infection and the human host.

“The idea that something we view as so small and simple can have such a capacity for destruction fascinated me,” she said. “The world is my lab.” necessary for the future.”