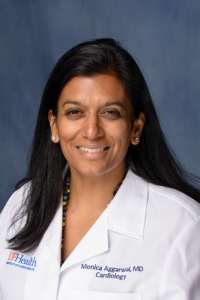 Growing up with meat and potatoes always on his plate, Robert Capozzi never had much use for a plant-based diet.

However, his physician, Monica Aggarwal, M.D., FACC, knew it was time for him to learn about it based on his health issues. When Aggarwal started seeing Capozzi after his triple-bypass surgery in the beginning of 2018, she introduced him to the new plant-based menu at UF Health Shands.

“So much of the time we are focused on giving people medicines after they become seriously ill,” said Aggarwal, director of integrative cardiology
and prevention in the UF College of Medicine. “Treatment of patients unfortunately is primarily focused on treatment with medications. We are
trying to change the focus to lifestyle changes, which includes diet and exercise.”

This is why Aggarwal came to the University of Florida about a year and half ago. She wanted to build a program to teach patients, students and
caregivers how to eat healthier, to help lower their risks of contracting a chronic illness.

“We began conceptualizing the menu with Dr. Aggarwal in the fall of 2017,” said Lara Zamajtuk, UF Health Shands associate vice president of
operations. “Gathering a team of hospital dietitians and nutrition experts, along with our senior executive chef, we created a menu that offers
healthy food options that are plant-based.”

“We created entrees that looked and smelled appealing,” said Andrew Hennis, senior director of UF Health Shands Food and Nutrition Services.
“We had to overcome people’s resistance to trying them. If people feel satisfied after finishing a delicious, healthy meal, they may change what
they eat.”

The new menu includes entrees like lentil bolognese over pasta and chickpea potato coconut curry and was first made available to patients in
the UF Health Heart & Vascular Hospital. The goal is to expand the menus to other facilities in the future.

In addition to black bean burgers, tofu vegetable stir fry and oatmeal, patients also will find the American Heart Association’s recommended
daily servings of fruits and vegetables. Aggarwal hopes the new menu will help her cardiac and vascular patients because eating these foods puts
them on a path to lowering their risk of heart disease.

“When a patient comes into the hospital and they have chest pain, for instance, they’re told that they’ve had a heart attack and they get stents
put in their heart and usually they get a list of medication,” Aggarwal said.

Her goal is to broaden the conversation to: “Sir/Ma’am, you’ve had a heart attack, but don’t worry, we’ve got you. We’re going to show you
some of the foods we want you to eat, so you can start incorporating some of those foods into your diet at home, and teach you how eating
the right foods can make you feel better. We are going to give you tools so you can work on healing yourself.”

Capozzi, 58, of Hawthorne, Florida, said the menu was an adjustment, but he said the change has been worth it. “I’ve been holding extremely
true to the diet,’’ he said, “and most people can’t believe (my health) has changed that much.”

Capozzi said his bloodwork has been coming back good and he is off the medication he was originally taking. Aggarwal told him that he can
have treats, but Capozzi is using this plant-based diet as a way to lose weight, so he is sticking to it completely.

“One of the neatest things (Aggarwal) said to me was, ‘If you eat my diet, I don’t care what your weight is,’ ” Capozzi said.

Menu items are being rolled out to hospital visitors and staff but the entire menu is available to patients in the UF Health Shands system.
They’ve been using it for several months, and Aggarwal said the reaction has been good.

“People say things like, ‘Wow, I really didn’t expect that eating plants would taste so good,’ ” she said.