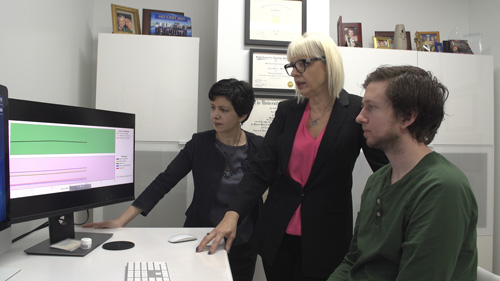 In a hospital’s intensive care unit, doctors get a cascade of data about each patient’s condition that can be challenging to quickly organize and interpret. Now, University of Florida researchers have developed and successfully tested an artificial intelligence system that delivers streamlined and timely details about crucial changes in a patient’s condition.

The system, known as Deep Sequential Organ Failure Assessment, or DeepSOFA, works by collecting, organizing and presenting a patient’s medical data so that doctors can make nimbler, better informed decisions.

“As a doctor, you want the big picture. You want a complete, timely snapshot that tells you how your patient is doing, said Azra Bihorac, M.D., co-author of the findings and a professor of medicine and surgery in the UF College of Medicine, part of UF Health.

“This is the next generation of intelligent decision support.”

Using data and outcomes from prior patients to test DeepSOFA, the researchers found that it delivers more accurate predictions of in-hospital
mortality than other models. The findings were published in the journal Nature Scientific Reports.

DeepSOFA buys crucial time by indicating which intensive care unit patients may need a lifesaving intervention to prevent potentially fatal conditions, Bihorac said. DeepSOFA can be a powerful predictive tool to help doctors determine how a patient’s condition is trending and what may be causing that change, she said.

“It’s very hard for us to efficiently review all of a patient’s data because of the way it is scattered. As a human, you can’t always put all of a patient’s numbers together with the speed and precision of a computer,” Bihorac said.

To develop DeepSOFA, her team worked with Parisa Rashidi, Ph.D., a UF assistant professor of biomedical engineering and co-author of the paper.

Rashidi and doctoral student Benjamin Shickel spent several years working with Bihorac and her team to develop the algorithm that powers the program. The system uses “deep learning,” a type of artificial intelligence that automatically processes large amounts of raw data and discovers latent patterns within those numbers. The result: A real-time, autonomous system that gives doctors an efficient and thorough look at a patient’s
condition and how it is trending.

It is the first time that deep-learning technology has been used to generate patient viability scores, the researchers said.

To validate DeepSOFA’s effectiveness, the researchers used it to analyze data from more than 85,000 prior patients at UF Health Shands Hospital and Beth Israel Deaconess Medical Center in Boston.

DeepSOFA’s ability to accurately predict patient mortality was measured against a traditional model of SOFA that was devised elsewhere about 20 years ago.

Both models were tested using 14 variables that are key indicators of patient health, including the central nervous system, respiratory and cardiovascular functions. Among both patient groups, DeepSOFA showed “excellent” performance compared with the traditional SOFA model, the researchers found. DeepSOFA accurately predicted in-hospital mortality for an entire ICU stay in 90 percent of cases, compared with 79 percent mean accuracy for the traditional model. The traditional SOFA model tended to underestimate the severity of illness and predict relatively low chances of death, whereas DeepSOFA was found to better quantify illness severity and death risk.

DeepSOFA also outperformed the traditional model when studied in a single-patient case, the researchers found.

In the final five hours before death, DeepSOFA estimated a 99.6 percent chance of mortality compared with 51.5 percent for traditional SOFA.

DeepSOFA’s accuracy during the tests on the single patient’s data was particularly notable, Rashidi said.

While artificial intelligence is a powerful tool to augment doctors’ decisionmaking, it comes at a price: Collecting patient data in real time and pushing it through an analytics engine such as DeepSOFA would require extensive initial investments, Bihorac said.

Next, the researchers will work on the technical infrastructure needed to integrate DeepSOFA with electronic health records in real time, which would allow it to run autonomously in hospital settings, Rashidi said.

From Patient to Researcher