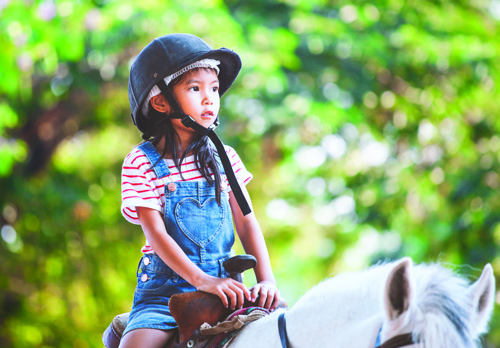 Laurel C. Blakemore, M.D., has been riding horses since she was a child. Today,  the pediatric  orthopaedic surgeon  uses the skills she has  honed through years of  practice to help her  young patients gain a  better use of their  bodies while also  ramping up their  confidence A professor in the UF College of Medicine’s department of orthopaedics and rehabilitation and chief of the pediatric orthopaedics division, Blakemore has been working at UF since 2014 with younger patients with muscular and skeletal conditions ranging from broken bones and scoliosis to cerebral palsy and muscular dystrophy.

At the UF Health Orthopaedics and Sports Medicine Institute, Blakemore often refers her patients to horse-riding facilities that offer hippotherapy, a treatment that uses horse movements to promote healing. It is used in physical, occupational and speech therapy for its effects on an individual’s sensory, neuromotor and cognitive systems.

Blakemore said the motor skills needed for horseback-riding make it a great supplement for many of her young patients’ treatments. The horses’ deliberate movements encourage the rider to have proper balance and posture.

“Almost all kids really like it,” she said. “For a lot of them, it’s a great experience because they can get move in a way that’s otherwise impossible for them.”

The American Hippotherapy Association says five minutes on a moving horse represents 500 neuromotor inputs to the patient. The horses are carefully selected for their low flight response, friendly temperament, clear gait and height.

“These horses respond beautifully. They understand that there’s something not quite the same with these kids,” Blakemore said.

She said many of the young patients have tight and spastic muscles and experience difficulty in walking or holding their head and torso up.

One of the measurable effects of hippotherapy is a significant improvement in muscular control. Blakemore said some children eventually learn to ride independently.

Savannah LaMendola-Centeno, 13, is one such patient. Savannah was born prematurely and was diagnosed with cerebral palsy, according to her mother, Kim LaMendola.

In her younger years, Savannah struggled with a severe lack of muscle control, sometimes falling off her desk or struggling to pick up a pencil. She started hippotherapy a few years ago to build muscles in her core, feet, calves and thighs.

“She could hardly sit on a horse when she started,” Kim LaMendola said. “She would have three or four people trying to hold her up.”

After years of weekly hippotherapy sessions, Savannah is now able to compete against children without disabilities, even winning two medals in her first horseback riding competition in 2017.

“Savannah was in about fifth grade when she started getting upset because she noticed the difference between her and the other kids,” her mother said. “But when she gets on a horse, she lights up and her confidence goes through the roof because finally, she’s as good as, or better than, other kids at something.”

Having been recognized as a regional and national champion in show jumping, Blakemore is able to connect with patients who share a love for horses. Kim LaMendola said Savannah feels less nervous about her medical appointments because of her excitement to see Blakemore.

At the facility in St. Augustine where Savannah continues to pursue hippotherapy, she does more than just ride. She also helps wash and brush horses, and carry out saddles and bales of hay.

Blakemore said that through donations, the costs to the patients’ families are kept to a minimum, and she urges parents to consider the therapy.

To date, Blakemore has had about 20 UF Health patients do hippotherapy, and she hopes the numbers will continue to increase.

“I hope hippotherapy continues to take off because I have seen and understood its benefits for my patients,” she said. “It’s a great
‘nonmedicinal’ activity that really makes them feel and do better.”

Lessons from childhood influence a career in academic medicine