Taking Psychiatry to the Streets 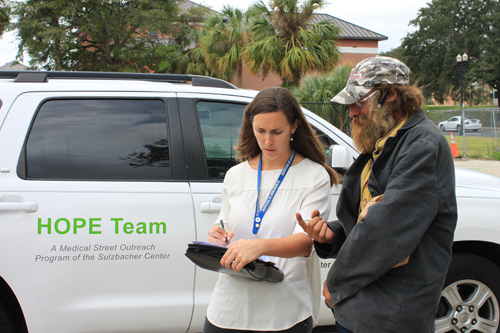 It’s a hot summer afternoon and as Ana Turner, M.D., steps onto the pavement she notices looming rain clouds. Meanwhile, Chris is sitting in his usual spot in front of a beautiful new mural in downtown Jacksonville.

“Are you coming to the shelter tonight, Chris? It looks like it’s going to rain,” Turner asks. Chris reluctantly nods in response and accepts the bagged lunch that Turner brought him. While opening the bagged lunch, Chris tells a little bit about himself to the University of Florida medical student joining Turner on this
particular outing. He eventually declines a ride to the shelter and stays in his spot.

Since Turner met Chris a few months ago, he has moved so little that there is a black mark on the wall framing his seat. Turner is determined to keep Chris, a man who likely is experiencing severe mental illness in the form of schizophrenia, engaged and connected with medical services. As a psychiatrist with UF Health
Jacksonville, Turner, an assistant professor in the UF College of Medicine – Jacksonville, spends part of her week at the hospital, working with medical students and residents. The rest of her week is made up of clinic hours at the I.M. Sulzbacher Center and on the streets of Jacksonville, working with patients like Chris and any others she meets.

Turner works hand-in-hand with the team at the Sulzbacher Homeless Outreach Project Expansion, or HOPE, to connect with potential new patients. As part of Turner’s outreach with HOPE, residents and medical students take rotations each week to meet homeless patients where they are, including under bridges, in city
parks and on the streets.

“The HOPE Team represents the core of our partnership with Sulzbacher — seeking out the most vulnerable and ensuring they receive medical assistance,” said Colleen Bell, M.D., the medical director of Behavioral Health for Sulzbacher who oversees the HOPE team programs.

“We take time to get to know each one of our patients so we can pinpoint their needs and provide a comprehensive treatment approach.”

In street psychiatry, standard evaluations and treatment occur wherever possible in order to deliver critical care to this at-risk population.

“Every day is so different: There is nothing typical from one day to the next,” said Turner.

Turner said, unfortunately, many of the people she meets have a negative view of the health care system and medical providers. Many people with mental illnesses believe they have been treated poorly and forced into medical care against their will. She feels that a large part of the team’s role is to build rapport and provide connections to social services.

“Almost 15% of the homeless population we see have severe psychiatric illness. This is an incredibly high percentage when you compare it to the 4% of the general population,” said Turner. “Society often has a notion that homeless people are lazy or addicted to substances, but it’s usually a complex web of issues that
leads people to end up on the streets.”

After an initial consultation, Turner can prescribe necessary medication, which can be picked up by patients or delivered by case managers. If applicable, the team supplies longacting medications so patients don’t have to worry about missing daily doses or staying compliant with their medical regimen. The team works to collect as much patient information as possible to help document the care path.

Oftentimes, patients will spot the HOPE van and flag down case managers to request an appointment time with Bell or Turner. In her two years practicing street psychiatry in Jacksonville, Turner has seen patients receive the medical care they need and successfully return back to society. This past year alone, the HOPE
outreach program has provided care for more than 1,200 new clients and nearly 1,400 returning patients.

To help even more people, UF Health expanded its partnership with Sulzbacher this year. Sulzbacher recently opened a new center for women and children, making it the first trauma-informed daycare in the city. UF Health child psychiatrist Shirley Alleyne, M.D., an assistant professor in the UF College of
Medicine – Jacksonville’s department of psychiatry, helps at-risk children and their families, while teaching the next generation of doctors about trauma
and its impact on childhood development.

After several months of making care accessible to Chris, he no longer sits in his lonesome spot downtown. Instead, he is at the Sulzbacher shelter and
participating in psychiatric care. He works closely with his case managers to obtain stable income and shelter, and gives the biggest smile to anyone who asks how his day is going.