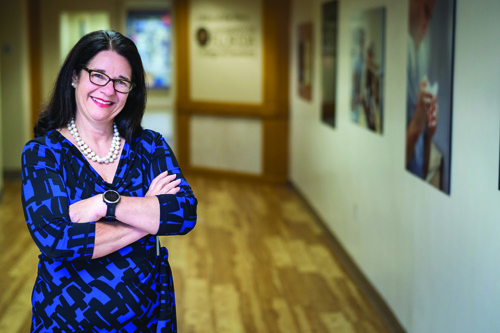 Venita Sposetti, D.M.D., started as a high school science teacher and quickly realized she was on the wrong career path. She found a passion for dentistry and stuck with it for 39 years.

“I had no idea what a perfect fit academic dentistry would be for me,” she said.

After a varied career at the UF College of Dentistry, Sposetti retired in October as the associate dean for education and associate professor in the department of restorative dental sciences and the division of prosthodontics.

Sposetti graduated from Florida State University in 1973 with a degree in biology and a minor in chemistry. She taught high school students in Bainbridge, Georgia, for one year until she determined it wasn’t a good fit for her. She began shadowing professionals from various medical professions and decided that dentistry matched her skills and interests the most.

“I thought, ‘I like to make things, and I like people and I like science,’ ” she said. She then spent the next year preparing to attend the UF College of Dentistry.
After graduation and a one-year residency program at UF, Sposetti was hired as a visiting instructor in prosthodontics, which led to a faculty position in 1980. During this time, she also began providing dental care in the college’s faculty dental practice, where she saw patients at least once each week. Faculty practice was a highlight for her because of the connections she made with patients, similar to the interactions she had while teaching at the student dental center.

“Patients are awake, they’re conscious. To be a skilled clinician, you have to have multiple skillsets and definitely one of them is learning how to put people at ease and dealing with people who are frightened that they’re going to be hurt,’’ she said. “In the act of doing so, you develop deep relationships and they feel comfortable and keep coming back because they feel safe and they know you won’t hurt them.”

About 20 years later, Sposetti shifted into administrative work for the College of Dentistry. She said it was sad to leave patients she had known for so long, but she was excited thinking of the impact she would be able to make for students. She started as the assistant dean for admissions, a position she held from 2001 until 2011, when she was named associate dean for education.

Sposetti said she was interested in helping to diversify the D.M.D. program, and she feels she accomplished a personal goal of helping the college enroll and graduate a more diverse class across multiple dimensions of diversity. She said she loved being able to help students avoid the struggles she faced as a dental student, when she was one of only five women in her graduating class.

In 1997, she and some colleagues, helped by a grant from the Josiah Macy Jr. Foundation, created a program for first-year health professions students to learn about substance abuse. She is proud that after all of these years, the program is still alive.

Looking back on her career, she said she is so grateful for all of the connections she has made within the dental community and within the greater UF community. Saying goodbye to those friends and colleagues is one of the hardest parts of retirement, she said.

Goodbye was also difficult for her friends and students at UF. Olga Luaces, D.M.D., a clinical assistant professor in the department of community dentistry and behavioral science, said Sposetti played a very influential role in her career.

“Dr. Sposetti took the time to connect with each and every person at UF College of Dentistry,” Luaces said. “She exemplified what it means to be a true professional, and her dedication and work ethic have greatly contributed to the stellar reputation of the college.”

Sposetti has now traded her dental probe for a garden hoe, and she will look back on all of the memories she made at UF while checking things off her bucket list in her retirement.