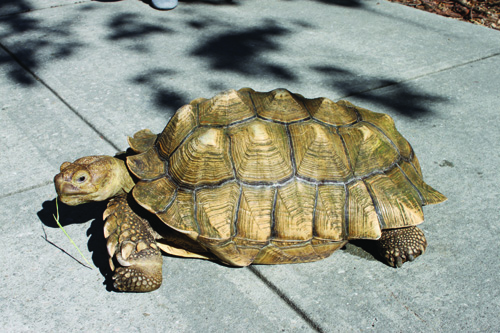 After a good Samaritan brought a stray sulcata tortoise to the University of Florida Small Animal Hospital on Oct. 8, veterinarians tried
unsuccessfully to find the 40-pound creature’s original owner. However, they did make an interesting discovery: the female tortoise, named Nancy by a
hospital technician, was allergic to a type of hay known as orchardgrass.

It was the first time such an allergy has been documented in tortoises or turtles, UF veterinarians said. But they were equally excited to make another significant finding — a new home for the exotic creature.

Also known as African spurred, or spur-thighed, tortoises, sulcatas are native to the Sahara Desert. They are the largest mainland tortoise, easily reaching 30 inches in length and well over 100 pounds. They are popular pets in the U.S., but as the tortoises grow, some owners find them hard to care for and release them or seek new homes for them.

About three weeks after the tortoise’s arrival at UF, as zoological medicine veterinarians were working with UF’s veterinary dermatology group to sort out the allergy issue, first-year anatomic pathology resident Marley Iredale, D.V.M., received a text from her mentor, Rob Ossiboff, D.V.M., Ph.D., a clinical assistant professor of aquatic, amphibian and reptile pathology. Ossiboff, whose interest is in reptiles and amphibians, knew Iredale had held a longtime interest in exotic animals.

“Want a sulcata tortoise?” he texted.

Iredale, who has a career interest in working with wildlife and exotic animals from an emerging and infectious diseases perspective, could hardly contain her excitement.

“It was like kismet,” she said. “I have wanted a sulcata tortoise for a long time, but personally I didn’t feel right buying one from a pet store. So I texted him right back, and said, ‘Of course, but where?’” Iredale said.

Ossiboff told her the animal had been brought in as a stray, and that UF zoo medicine veterinarians were trying to find a home for her. Soon after, Iredale walked down to the zoo medicine ward to meet the animal.

“It was love at first sight,” Iredale said.

She contacted her partner to make sure he was on board with adopting Nancy, and he shared her enthusiasm. The two then set about building a special outdoor enclosure, which they adapted with deeply embedded fence posts and through other means to keep the tortoise from escaping. Nancy was comfortable and in her new digs — minus the digging.

Sulcatas are notorious escape artists, said Amy Alexander, D.V.M., one of the zoo medicine veterinarians who has been caring for Nancy.

“Tortoises from this species are known for being excellent burrowers and diggers,’’ she said. “Therefore, it’s important to have a dig barrier in any fencing.”
The hay allergy discovery came as a surprise to UF veterinarians, who noted that when the tortoise arrived at UF, she was bright and active but had severe swelling of her third eyelids.

“Her blood work was unremarkable, and she was treated with topical eye medications,” Alexander said. “The eyes initially improved; medications were discontinued, but once hay was placed near her, the swellings recurred.”

But when veterinarians moved Nancy away from the hay, her eyes became normal again.

The UF veterinary team plans to write the case up for possible publication in a scientific journal.