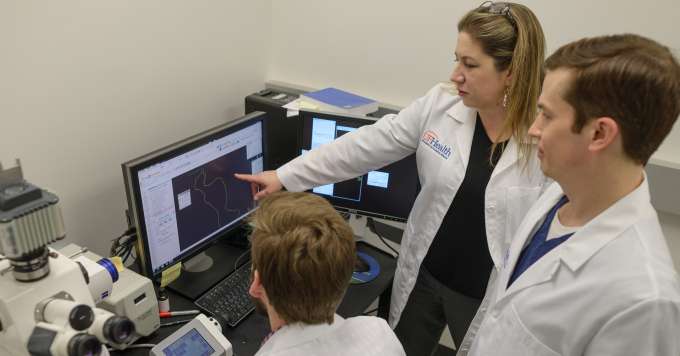 Jennifer Bizon, Ph.D., reviews images with colleagues. (This image was taken prior to national guidelines for face coverings and physical distancing.)

University of Florida neuroscientist Jennifer Bizon, Ph.D., an expert in brain aging, has been named chair of the UF College of Medicine’s department of neuroscience.

Bizon, who has served as interim chair of the department since April 2020, succeeds longtime chair Lucia Notterpek, Ph.D., who is now associate dean for biomedical research at the University of Nevada, Reno School of Medicine.

With an annual grant portfolio of over $21 million, UF’s department of neuroscience is ranked No. 5 nationally in funding from the National Institutes of Health.

“It is a true privilege to have the opportunity to lead such a talented group of faculty and students who demonstrate a clear passion for scientific discovery and quality education. I look forward to facilitating department collaborations and programmatic efforts with colleagues across our academic health center,” said Bizon, who also serves as a professor of neuroscience and co-director of UF’s Center for Cognitive Aging and Memory Clinical Translational Research, or CAM Center. “Embracing the concept of inclusive excellence, our department will further continue its efforts to recruit and advance an increasingly diverse community of neuroscientists.”

Over the last 10 years, the department has greatly expanded its national visibility and scientific impact, said Colleen Koch, M.D., M.S., M.B.A., dean of the UF College of Medicine.

“With Dr. Bizon’s leadership and through collaborations with others in UF’s neuroscience community, including the McKnight Brain Institute and the Norman Fixel Institute for Neurological Diseases at UF Health, the department of neuroscience has the momentum to lead the state and nation in discovery-based research and to expand educational opportunities in the neurosciences for students and trainees at all academic levels,” Koch said.

Prior to her arrival at UF, Bizon spent seven years as a psychology professor at Texas A&M University, where she was vice chair of the Neuroscience Executive Committee. She was recruited to UF as part of an initiative to expand the university’s research in cognitive aging, supported by the McKnight Brain Research Foundation.

Bizon is a National Institute on Aging-funded principal investigator who studies brain aging and its implications for cognitive function, with a long-term goal of identifying strategies and interventions to promote cognitive resilience at advanced ages. She has published more than 80 peer-reviewed articles and been named both a UF Term Professor and a UF Research Foundation Professor.