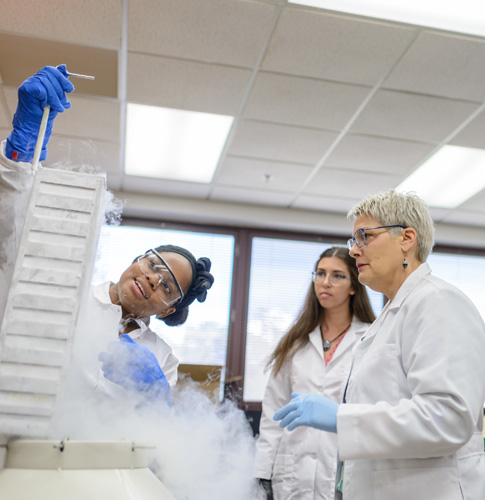 A team led by University of Florida College of Veterinary Medicine scientists reports that microbes living inside the intestines of pregnant mice more reliably predict susceptibility to, and severity of, malaria infection than do genetics — a finding they say may have implications for assessing pregnancy risk, and even outcomes, in vulnerable human populations.

“We’ve identified bacteria that can reduce the severity of the infection, which also translated into better pregnancy outcomes,” said lead researcher Julie M. Moore, Ph.D., a professor and chair of the college’s department of infectious diseases and immunology. “That’s the feel-good part of this research. If this ends up being something we can introduce into human populations, we’re saving babies.”

The study appeared in EBioMedicine, a journal of translational biomedical research.

Malaria is a life-threatening disease caused by parasites that are transmitted to people through the bites of infected mosquitoes. In 2017, there were an estimated 219 million cases of malaria in 87 countries, with 435,000 reported deaths, according to the World Health Organization. Malaria infection in pregnancy is also a major cause of maternal and fetal morbidity and death worldwide.

To conduct their study, the scientists used genetically diverse female mice that are known to develop severe malaria. They disrupted the composition of the native gut microbiota through broad-spectrum antibiotic treatment, followed by a fecal microbiota transplant from mice possessing a different gut microbial community. These microbes were previously found to confer resistance to malaria infection in research conducted by Nathan Schmidt, Ph.D., at the University of Louisville School of Medicine.

“We found that susceptibility to infection varied significantly as a function of the source of the transplanted gut microbe as well as the specific categories of bacteria the microbes were a part of. And reduced parasite burden was associated with less maternal disease and improved pregnancy outcomes,” Moore said.
Conversely, the scientists concluded that high maternal parasite burden and associated maternal responses, potentially dictated by specific microbes in the gut, negatively impacted fetal health and survival immediately after birth in the mice studied.

In finding that the genetics of the Swiss Webster mice used in the study are not a prominent determinant of malaria infection or severity during pregnancy, the researchers have identified a possible new pathway toward influencing pregnancy outcomes, not just in humans, but possibly also in other animal species that are hosts for malaria parasites, Moore said.

Taking Psychiatry to the Streets